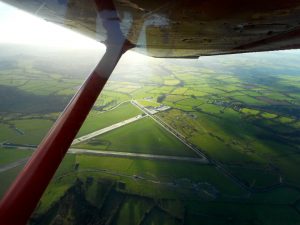 Upottery was one of two Devonshire bases from which the 101st Airborne Division embarked (to Normandy) on the night of June 5th 1944 as part of the D-Day invasion. (The other bases were outside of the county).

On the night of 5th June 1944 Dakotas lifted off from Upottery Airfield in Devon as part of the D-Day invasion of Normandy.

On the night of 5th June 1944 Airborne forces from the 101st Airborne Division took off from airfields around Devon ( Upottery and Exeter) as part of Operation Neptune, the airborne part of the D-Day landings. 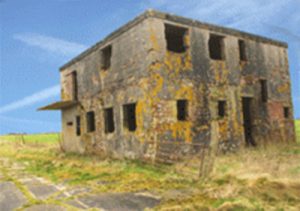 On the night of 5 th June 1944 the Dakotas lifted off from this Devonshire airbase carrying paratroopers of the 506th PIR 101st Airborne Division ‘Band of Brothers’, and headed east to Portland Bill, where they assembled at an altitude of 10,000 ft.

Altitude was then reduced to 650 ft as the aircraft headed south-west to a point in the middle of the English Channel code-named GALLUP, which was marked by a Royal Navy beacon-ship.

From here the fleet of 821 Dakotas flew south to a point west of Cherbourg on the French coast, code-named HOBOKEN, which was indicated by a lumious signal from a submarine.

Here the aircraft climbed to 1,650 ft to avoid the Flak guns of the Channel Islands, before heading for landfall on the Normandy coast, named MULESHOE Point.

This was a Day of Days. The Longest Day.

Upottery came under RAF control in October but did not see much use until the US Navy’s VPB-103, PB4Y Liberators from nearby RAF Dunkeswell moved in on 7 November while the main runway was being repaired at their normal base. 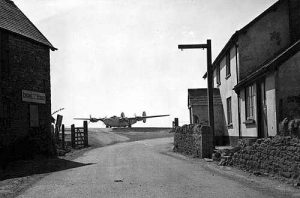 Following the war the airfield was used by the Royal Air Force for the storage of surplus material until the end of 1948, after which the airfield was returned to the farming community from which it was requisitioned. 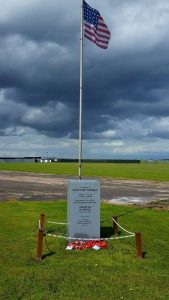 The name Upottery derives from the River Otter, which rises at Royston Water just out of the Upottery parish boundary, and flows through the Otter valley until it reaches the sea at Budleigh Salterton.

There is only one ‘P’ in the name, the addition of a second often being an Americanism.