A BRIEF HISTORY OF THE DC3:   THE GOLDEN AGE OF AVIATION 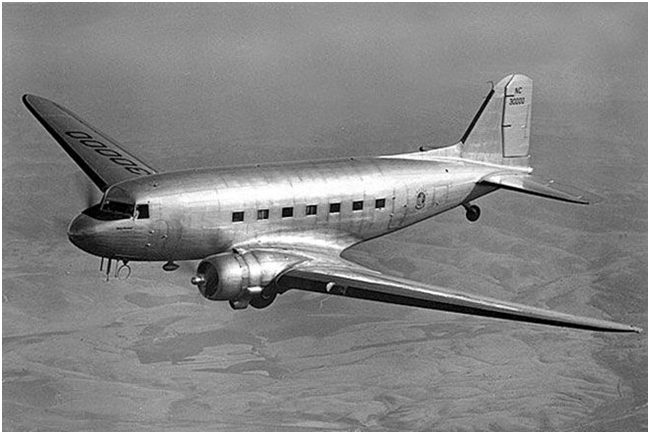 The Douglas Commercial No. 3 (DC3) designed by a team of designers headed by Donald Douglas was, without doubt, one of the finest aircraft which entered the fast developing industry for passenger carrying aircraft.

During the 1930 era despite the deep recession America was suffering, airlines like TWA, American Airlines and United Airlines were still in business and viable, not only in passenger carrying, but also in air cargo and mail, keeping the industry alive over those difficult years.

In the early 30ties Boeing was the first company to produce the modern passenger aircraft the 247.  An all metal machine, with comfortable interior, a retractable undercarriage with twin engines.  There was a rush for orders by the airlines.

United Airlines placed an immediate order for 70 and as they were part of Boeing, their order had to be honoured first, and other airlines had to wait.

As a consequence of this, TWA sent out specifications for a modern airliner to various manufacturers including Consolidated, Martin, Curtis,  General Aviation and also the Douglas Company, who eventually were awarded the contract.

The design team were headed by Donald Douglas with several other highly qualified men, namely James Kindleberger who went on to design the P51 Mustang and Jack Northdrop who designed the multi spar wing for the DC1, DC2, and DC3 which gave the aircraft its strong and robust wing.

The design of the DC1 sent to TWA met all their necessary requirements.  These were:-

To be able to take off and land on one engine.

To be able to operate off of any type of run way, i.e. grass,

To carry a minimum of twelve passengers.

The most stringent was that this aircraft must be able to operate from any airfield in their network on one engine.  Many of these airfields had an elevation of 4,000 feet with air and high ground temperatures around 90 degrees, making this a very difficult feat.

Wright Cyclone engines were decided upon with a landing gear that would retract into the nacelles of the cowlings and the multi spar wing.  The result was an all metal, very strong modern airliner, faster and more refined, safer and carrying 12 passengers.  The total cost came 307,000 dollars.  The Douglas Commercial No.1 (the DC1) was a great success.  It made a number of test flights reaching 22,000 feet with a full load at 18,000 lbs.  It could take off and land in less than 1,000 foot runway and could land with full flap at less than 65 mph.

TWA placed an immediate order for 25 aircraft, with a number of refinements to be made.  Firstly the fuselage had to be increased in length and width to accommodate 14 passengers.  The surface ceiling was increased, the speed was increased and even inflight movies were shown.  This new version the Douglas Commercial No.2 (DC2) was hailed the finest passenger carrying airliner in the world.

This was the aircraft the industry had been waiting for, it overshadowed the Boeing 247 and there was a rush for orders for this great concept of design and engineering of which there was no equal in the industry.

The first Douglas Commercial No.2 (DC2) was handed over to TWA which flew from New York to Los Angeles in record time.  The transcontinental flights consisted of four legs.  New York to Chicago, Kanas City, Albuquerque and Los Angeles.  The aircraft began production in 1934 and operators began a rush for orders.

In 1934 an aircraft operated by KLM was entered for the MacRobertson air race from London to Melbourne.  The DC2 came in second to a specially designed aircraft built by De Havilland called the Comet (DH88).  Despite the fact that the DC2 came in second, it carried freight, passengers and mail. This made it an ordinary commercial aircraft on a specific commercial route which was over 1000 miles longer than the  Comet’s route.  This feat made the aircraft the finest passenger carrying aircraft in the world.  The Boeing 247 was now considered not to be a commercial success, which prompted American Airlines to ask Douglas to increase the size of the DC2 to accommodate 14 sleeper passengers and or a 21 passenger version, convinced that this would make the new version profitable by just carrying passengers and no freight or mail.  The result was the Douglas Commercial No.3 (DC3), the greatest passenger aircraft in aviation.

This aircraft quickly established its reputation with airlines throughout the globe, including the military.  During the late 30ties and throughout the war years of WWII the DC3 was manufactured in a utility version for freight carrying or ambulance service or carrying military personnel in all the theatres of the war.  It played an important role during the D-Day operations and the assaults of the airborne troops in that period.

Out of 16,000 variants produced, 607 were DC3’s and the rest were C47’s and C51’s.  Some were produced in Japan and Russia under license.  Even today there are still versions carrying cargo, medical supplies and engineering equipment in many Latin American countries 80 years after they were built.

Recently I met a DC3 pilot who worked for Jersey Airlines during the 60/70ties who was an ex RAF pilot.  His experiences of the aircraft were very interesting as he said the earlier models had quite rudimentary instrumentation compared with today’s aircraft, but later were improved.  He also told me that you had to fly this aircraft because it could “bite back”.  Overall he said the aircraft was in many ways unbeatable for passenger carrying and was a great pleasure to fly.  He completed 3,000 flying hours in DC3’s.

THE DOUGLAS C47 SKYTRAIN AND  THE C53 SKYTROOPER

The C53 started production in 1941 and only 350 aircraft were produced in Santa Monica, California, because the C47 proved to be much more versatile for the different types of operations that it was involved in.

5,354 C47’s were produced between 1943-45 at their Oklahoma City Plant.  The C47 and the Navy version named R4D were made to counter the advances of Japanese troops in New Guinea and other areas held by the Japanese.  It also played a major role in the Berlin air lift, until it was replaced by the Douglas C54 Skymaster. 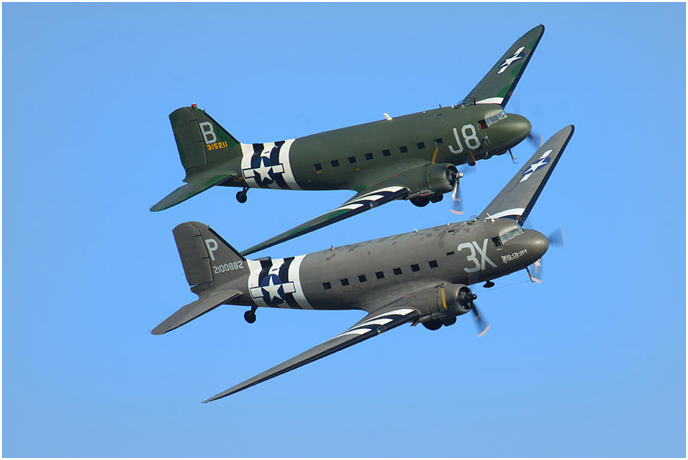