By the end of Operation Neptune, the airborne part of the D-Day landings in Normandy, the M42 jump-suits of the airborne forces were all but in rags. Clearly a new uniform was needed.  This page describes how to create a generic US airborne look for post D-Day. It is recommended that prior to beginning you decide which unit you are portraying, as units varied in the equipment issued.

During the Operation Torch landings in North Africa (1942) a flag armband was issued to all assaulting troops. This was made of a coated

material that feels similar to vinyl. During the Normandy drop a cloth flag was issued, although some photos show the earlier armband having been cut around the flag and sewn onto the jacket.

The same applies to the late war US identification, where examples of all three can be identified. 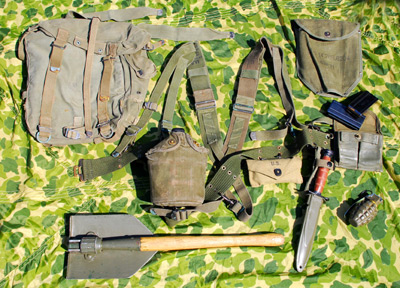 In 1944 a new type of webbing was authorised for use. The M-1944 system. This resembled the M-1936 pattern, although now all ranks were issued a musette style ‘field pack’. Extra carrying capacity was achieved by having a ‘cargo pack’ strapped to this, which could be left with the vehicle during an assault.

An instantly recognisable difference with this webbing, is that it was green, as opposed to the tan colour of the M-1936 webbing.

This webbing didn`t reach the airborne units until late 1944, early 1945 and the older M-1936 webbing, as used in Normandy, was more common.

The choice of unit to portray after Normandy is far larger than for that assault as the airborne force was greatly expanded. 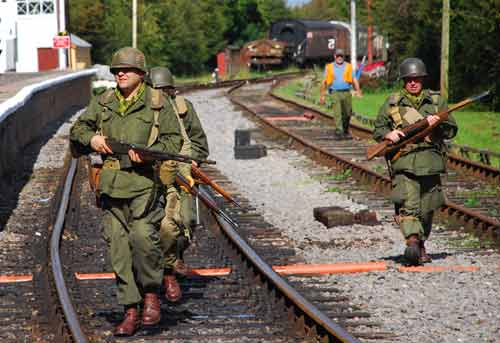 It is important to decide early on which unit you are portraying, as each unit had a slightly different look.

For example, an airborne reenactor friend has researched that:

Identification flags were generally the cotton/gauze flag for 82nd units in Market Garden, whereas the Oilcloth version was usually seen on 101st troops. This was cut down and pinned or sewn on or worn as a complete brassard. This was the same for the 17th Airborne during Operation Varsity.

Helmet nets like the one pictured were virtually withdrawn or worn out by Market Garden, although they can be seen in some photos of 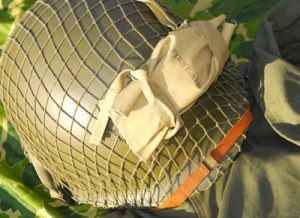 …….so it’s always best to check your reference before creating your look.

The weapons used are the same as for the D-Day look, and include all the US armoury such as M1 Garand, M1 Carbines and both Thompson and M3 ‘Grease gun’ sub machine guns.

Pictures have been seen of troopers using British Bren Guns, which adds an interesting variation to your late war US Paratrooper look, and will certainly get people talking.

Dotting the I’s and crossing the T’s

From here on in the sky is the limit for what you add. Check your research to find the right accesories such as gloves, shirt, pullover, rations, gas-mask case, scalf….the list really is endless.

A useful item is a greatcoat.

Not only are these very warm, which helps for winter events, but they make the ‘Bastongne look’. A 1950s British or French greatcoat can be bought cheaply and modified, although the US company ‘What Price Glory’ produce a very nice reproduction.