Airborne forces are always a popular choice for reenactors, if not because of thier elite nature, then because the kit looks so good.  This page describes how to create the US Paratrooper look for D-Day. 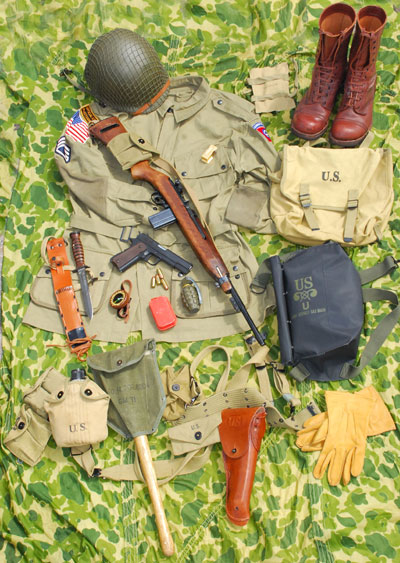 People fought and died in the uniform that you are going to assemble, so in their memory you need to do it right and be respectful of them.

If this isn`t your plan then wear something else!

The amount of kit you carry decides what can be defined as the basics. If you are ‘walking out’ you`ll need less kit than in combat.

The simplest and cheapest USAB look is simply an M42 reenforced jumpsuit, Corcoran boots, enlisted man’s wool shirt ( or silk scalf cut from a combat parachute) and a garrison hat. The unit emblem on the garrison hat during the D-Day period can be either the early blue version, or the later red and blue, although this is the more usual. This kit will provide you with a good grounding from which to build to a full combat kit.

A ‘Walking out’ uniform can be assembled for about £200.

Jump-ready paratroopers carried a huge amount of kit, and creating this fully loaded look can be expensive. It depends on how deep you wish to go.

To recreate the D-Day US Paratrooper look you need a reenforced M42 jumpsuit. 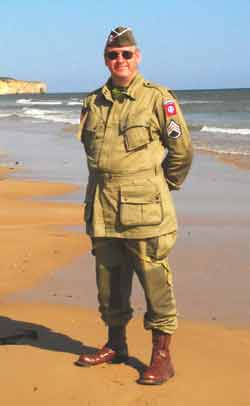 This suit is different to the pre and post D-Day jumps. Experience in Sicily and Africa showed that the suit was fragile, so just prior to D-Day the riggers reenforced the knees, elbows and pockets.

The suit is comfortable to wear, but does not provide much wartmth. All the usual reenactor suppliers do M42 Jumpsuits. Mine came from Ebay at about £80 for the jacket and trousers, and appears to be wearing well.

Troops returning to England after D-Day were almost in rags, having worn out their jumpsuits. Shortly after they were issued the M43 suit, which is the definitive ‘Market Garden’ or ‘Bastonge’ look. 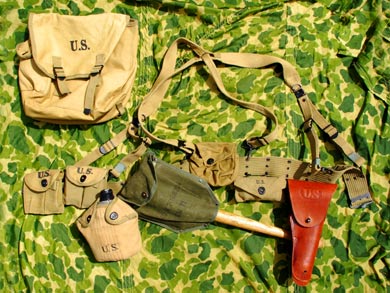 On top of the walk-out kit, the minimum combat loadout will require a M1936 pistol belt, BAR gunner’s belt or Garand cartridge belt – depending on your weapon. This is held up with a pair of 1936 pattern ‘suspenders’.

Water is carried in a M1910 aluminium water canteen. The ‘Carlile Dressing’ first aid pack lives in a small pouch.

Expect to pay about £100 for a reproduction basic webbing set and many times more for original items.

Be warned. The monkey-metal on most reproduction buckles is no where near as good as the original. A cost effective original belt is available for around £30, being one of a job-lot recently discovered in Russia ( lend-lease).

This depends on your chosen role.

Different legal aspects apply in different countries, so check this before you buy one.

The standard infantry weapon would be the M1 Garand. An ‘old-spec’ deactivated weapon, that has moving parts and field strips will set you back over £1000. A ‘new-spec’ one, that is non-stripable/moveable will cost about £400+. Marushin do a nice airsoft version at about £480, and there is a cheap Spanish version replica now doing the rounds at about £160. However, I think that this really does look cheap and cheerful…. 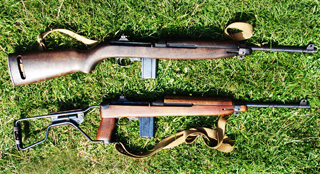 Non-infantry troops, like radio-men and Jeep drivers were issued carbines. The M1 Carbine was issued either as a full stock or folding para version. Deactivated versions of the full stock version are around £700. Soldier of Fortune do a reproduction folding stock for about £150, so you can convert if you wish.

A para version deac costs around £900. Marushin do a nice airsoft version at about £400, but it is fragile for airsoft use….but a cheap alternative for reenacting. Mine is pictured above. 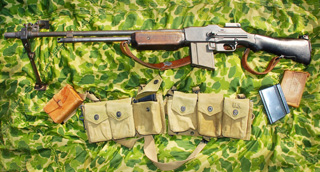 The definitive Airborne fighting knife is the M3 in a leather M6 scabbard. This was often strapped to the right calf. Additional to this, a bayonet (Garand) was also carried.

Wearing a Colt 1911 pistol is popular with reenactors, although these were withdrawn from the lower ranks prior to D-Day. This said, many people ‘aquired’ one, so the choice is yours. A deac will cost about £500, but there are many replicas available. Mine is an all metal WE airsoft pistol.

Grenades are available either deactivated or replica, and blocks of replica TNT are also available. Knuckle-dusters were often carried, although these are illegal in some countries.

Dotting the I’s and crossing the T’s

From here on in the sky is the limit for what you add. Check your research to find the right accesories such as gloves, shirt, pullover, rations, cricket, gas-brazzard, gas-mask case, scalf….the list really is endless.

Your family will never be lost for Christmas present ideas when you`re a reenactor.

Some reenactors portray themes, such as medics and Pathfinders.

The Pathfinders jumped into Normandy ahead of the main assault, and marked out the drop-zones. They often painted camoflauge onto their jumpsuits.

Each chosen theme should be researched to get the right kit. The author of this page specialises in portraying the role of a Combat Cameraman.